Service accounts used for managing the applications in the active directory environment like MSSQL, IIS, EXCHANGE, SAP, etc. They are also responsible for generating and validating the service tickets in the Kerberos protocol. For the applications to run without any error, related service accounts are either granted higher privileges than they require or added into privileged groups (Domain Admins, Enterprise Admins, Administrators).  These types of unnecessary rights bring higher risks and impacts.

In the Active Directory environment, the “Account” can be used for both users and computers. So, a service can be managed by either a user account or a computer account.

Service Principal Names are used for representing these services uniquely in the Active Directory. These SPN records are uniquely structured within the same domain. The SPN record of each service is associated with the account that managing the service and used during the Kerberos protocol. These SPN values are kept in the ServicePrincipalName attribute of the assigned accounts. These values can be seen with tools such as Active Directory Users and Computers and ADExplorer. SPN values can be in different formats. Some of the possible syntaxes are given below.

SPN values and related accounts can be seen with the commands below. 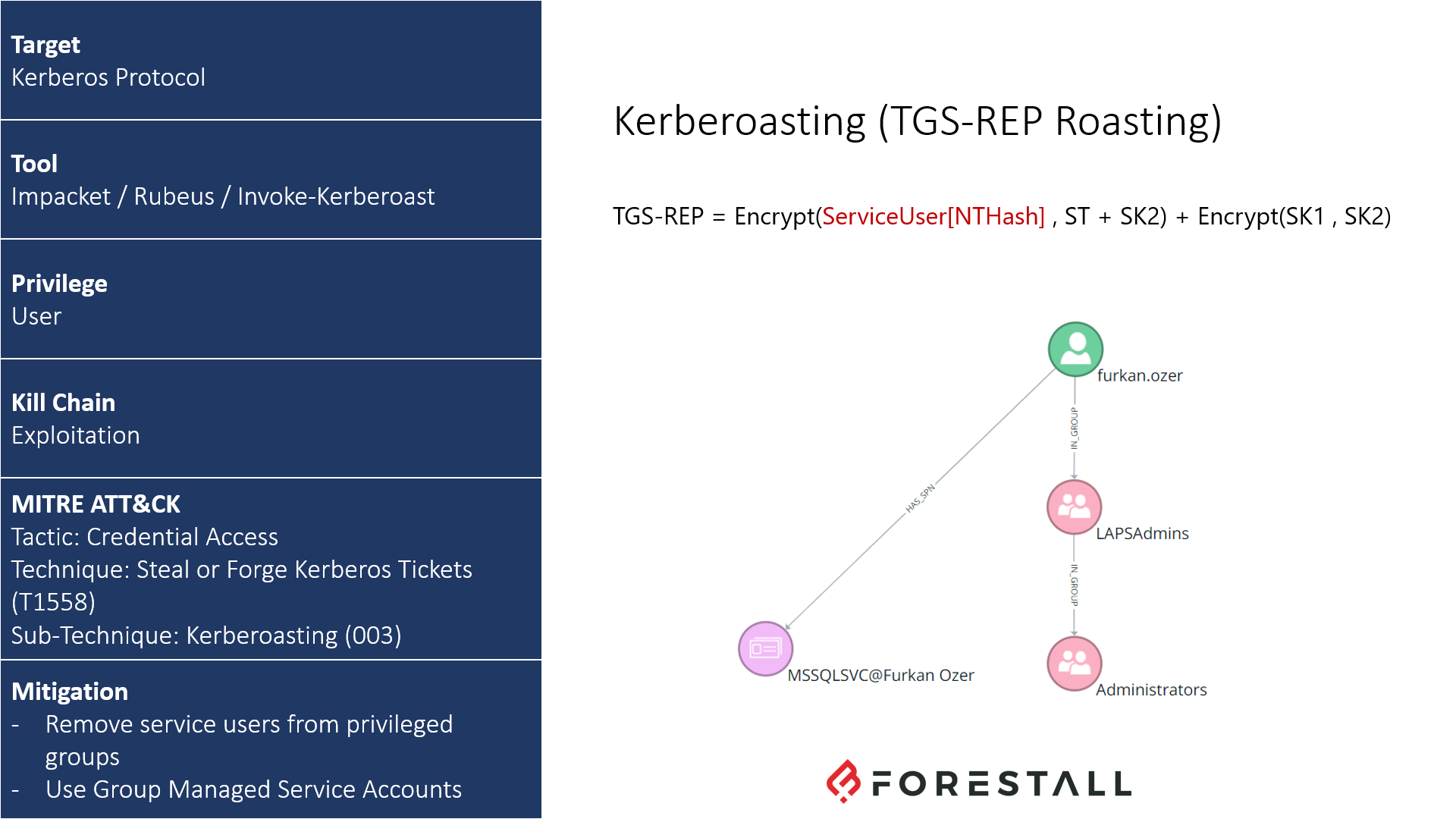 In Kerberos protocol, to access a service, the user first receives a Ticket Granting Ticket (TGT) from the Key Distribution Center (KDC) and then a Service Ticket (ST) for the service they want to access using the TGT. Then, the client accesses the service with the ST. There are two significant points in this process in terms of security. 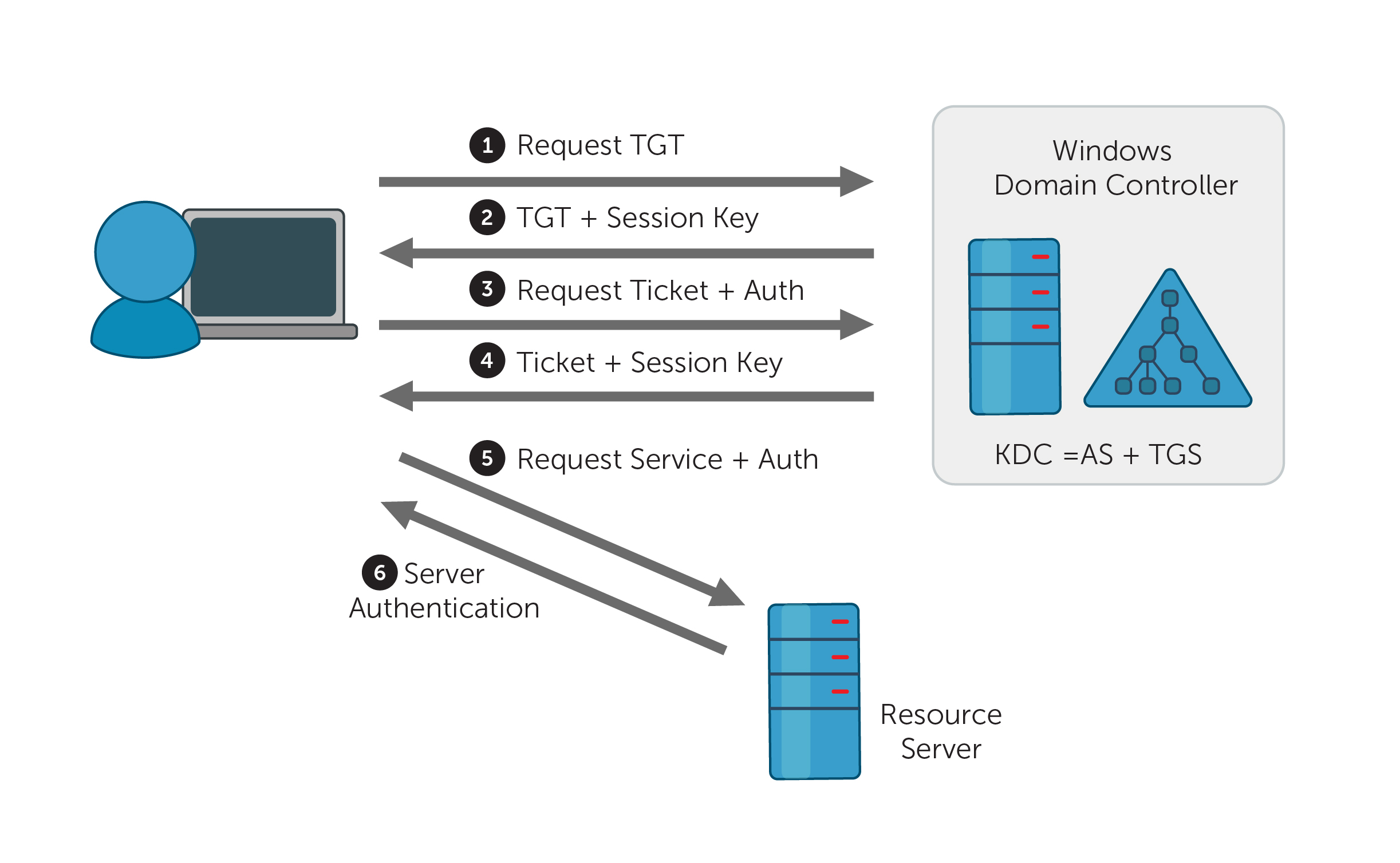 Attackers can use these two key points to perform an attack called Kerberoasting. To perform this attack, the ST of the target service must be obtained by using the domain user privileges. Since the obtained ticket is encrypted with the NTHash of the service account, the clear-text password can be obtained with the offline brute force attack. If the password is not complex enough, the hash can be cracked easily. Attackers can use this cracked password for compromising the entire domain.

Service accounts are often equipped with more than necessary privileges to avoid any problems while running applications. They are usually added as a member of the administrator groups (Administrators, Domain Admins, etc.) or the local administrator group (Local Administrators). If the service users are added as a member of these groups, as a result of the above-mentioned attacks, the attacker can easily increase his/her privileges and take over the entire domain environment.

Access Control Entry is a security mechanism designed in detail to control the access rights on objects in the Active Directory environment. Due to its detailed design, managing the access control entries are very hard, and this complexity enables the attackers to target this mechanism. Even if service accounts are not a member of privileged groups, they may have admin privileges because wrong ACE definitions. Also, non-privileged users can affect these service accounts because of misconfigured ACE implementations. Either using or creating misconfigured ACEs, the adversaries can compromise the AD environment and create backdoors for persistency.

For example, in the image below, with a little change on the mssql.admin user, all users in the Domain Users group can reset the password of this account.

Similarly in the image below, the mssql.admin user has been given the right to change the ownership (Modify Owner) of furkan.ozer, which is a privileged user. With this modification right, desired changes can be made by changing the owner of the object. 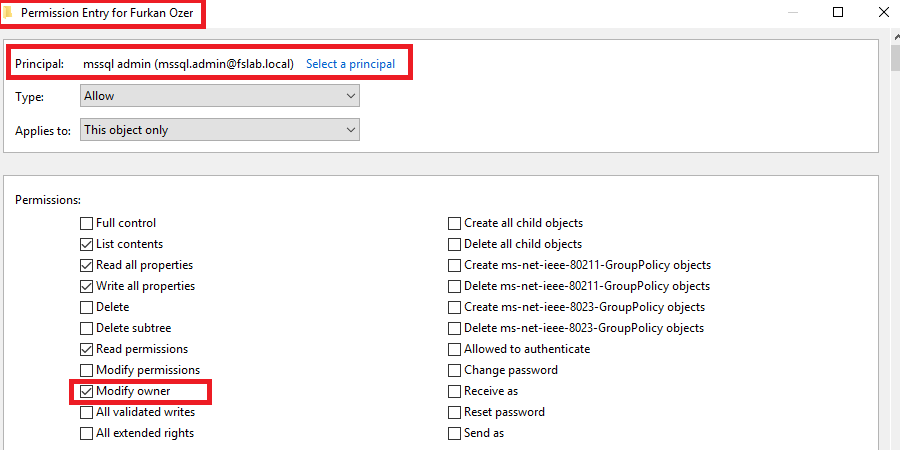 Finally, the attack path caused by these misconfigured Access Control Entries can be seen below.

Powershell and ActiveDirectory module are mostly used to create a GMSA. In addition to this method, these operations can also be performed with the Managed Service Accounts GUI application of CJWDEV.

To create a GMSA, it is necessary to create a KDS Root Key first. It is sufficient to create this key once in a domain environment.

Querying the KDS Root Key object in the domain

Creating the KDS Root Key object in the domain

To manage the servers where the GMSA accounts will be used, servers can be added into a security group. In this way, services can be managed by adding and removing from the group without making any changes on the GMSA object. Although this process is recommended, it is not mandatory for the use of GMSA.

If you create a group and add the servers to this group, you need to restart the servers for the activation of a group membership. 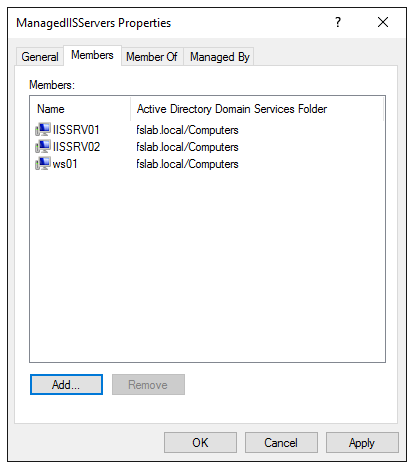 The group created for servers where the GMSA will be used

After performing these operations, a GMSA can be created using the following commands.

After the GMSA is created, it can be viewed with Active Directory Users and Computers application.

After the GMSA is created, login to the server where the service is running and run the following commands.

Installing the GMSA on the server 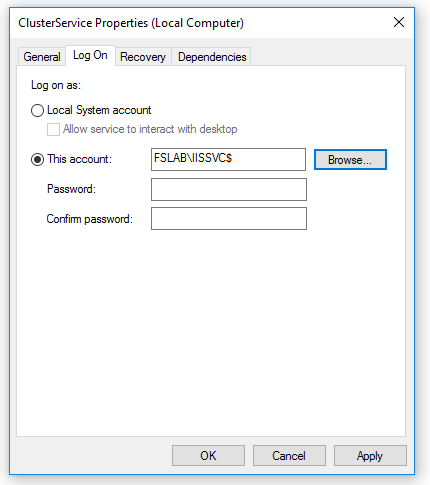 There is no need to enter a password while using the GMSA in the service.

Forestall is focused on adversarial tactics on Active Directory. With this motivation, we are developing a multi-staged platform that comprises proactive and reactive countermeasures for emerging Active Directory threats. Also, we share our deep technical knowledge with customers through unmatched services.